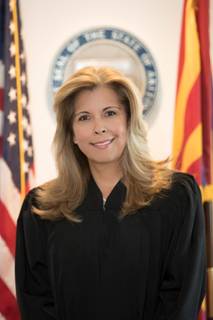 Charlene Pesquiera was elected Justice of the Peace in 2016 for Pima County Precinct Four, Tucson’s Westside. Charlene was born in Los Angeles California, her parents moved to Tucson in 1971 where she attended elementary school and college. She received a Masters Degree in Business Administration from the University of Phoenix, received a Pre Law and Criminal Justice degree from Prescott College and received an Associate’s degree in Criminal Justice and Corrections from Pima Community College.

Charlene was an elected Arizona State Senator in 2007 to 2009 where she proudly passed successful pieces of legislation to protect our State. Throughout her 30 year career she has dedicated herself to helping individuals with substance abuse, domestic violence and mental health issues. Charlene was also co-owner of the National Institute of Contract Management LLC, where she specialized in contract management for businesses and non- profits. Charlene was a Criminal Justice Adjunct Professor, instructing Computer Forensics, Criminal Law, Juvenile Justice, Rules of Evidence, Criminal Justice and Government courses.